Pythoness the Life and Work of Margaret Lunley Brown

Margaret Lumley Brown was a leading member of Dion Fortune's Society of the Inner Light, taking over many of Dion Fortune's functions after the latter`s death in 1946. She raised the arts of seership to an entirely new level and has been hailed with some justification as the finest medium and psychic of the 20th century. Although she generally sought anonymity in her lifetime, her work was the source of much of the inner teachings of the Society from 1946 to 1961 and provided much of the material for Gareth Knight's The Secret Tradition in Arthurian Legend and A Practical Guide to Qabalistic Symbolism. Gathered here is a four part record of the life and work of this remarkable woman.

Part One presents the main biographical details, largely as revealed by herself in an early work Both Sides of the Door, an account of the frightening way in which her natural psychism developed as a consequence of experimenting with an ouija board in a haunted house.

Part Two consists of articles written by her on such subjects as Dreams, Elementals, the Faery Kingdom, Healing and Atlantis, most of them commissioned for the legendary but short lived magazine New Dimensions.

Part Three provides examples of her mediumship as Archpythoness of her occult fraternity with trance addresses on topics as diverse as Elemental Contacts, Angels and Archangels, Greek and Egyptian gods, and the Holy Grail. Part Four is devoted to the occult side of poetry, with some examples of her own work which was widely published in her day. Gareth Knight was a colleague and friend of Margaret Lumley Brown in their days in the Society of the Inner Light together, to whom in later years she vouchsafed her literary remains, some esoteric memorabilia and the privilege of being her literary executor. 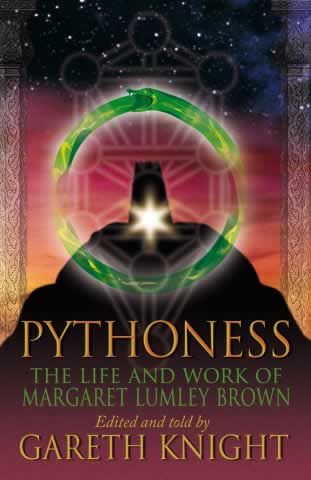